Signage when its a problem

A person owns a chicken shop. When he comes to work on Friday morning, he finds this big sign from KFC plastered on the side of his store. Pointing to a KFC store 800 metres up the road. 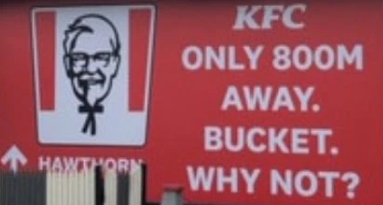 He thought this went too far, as clearly from the reaction of people on twitter here so did most people.

It is not a new problem. I had a client that had a family general store and a massive quite sexual explicit sign went up, and they did not like it at all, The problem is that many people have leases on the shop but not on the signage. To the landlords, the signage is often worth more then the shop and this signage are usually operated by an advertising company that has signs everywhere. As such, what goes up on these signs is often something that the people nearby do not approve of although generally there is little they can do, although I have heard of people going out with a can of paint at night to fix the problem.

Although this is being portrayed as a small businessman vs large company, which it is, the same problem I have seen happening with large corporations. In this case, the problem was fixed quickly as the sign was removed promptly.

It does show a problem that if you are taking a lease on a property that you do need to consider, the signage and who has control over it.

I had a client that was not allowed to put a sign up advertising his cafe as it was felt that it would intrude on the commercial environment in the office block that the landlord was trying to create. They argued that without such a sign, how can their cafe exist? They lost the argument and soon moved out.