The big trend in retail now, are the newer cards that allows a customer to buy and use a product immediately, and then pay for it later with no interest. This market is dominated by three main players Afterpay (which is by far the biggest), Zippay (which is the talk of town at the moment since Westpac put $40 million dollars into it) and Oxipay (which I know little about other then it is in Tasmania). Paypal is unknown whether it will enter this marketspace. As you can see from this graph, there is as much interest in Afterpay as Paypal in Australia now. 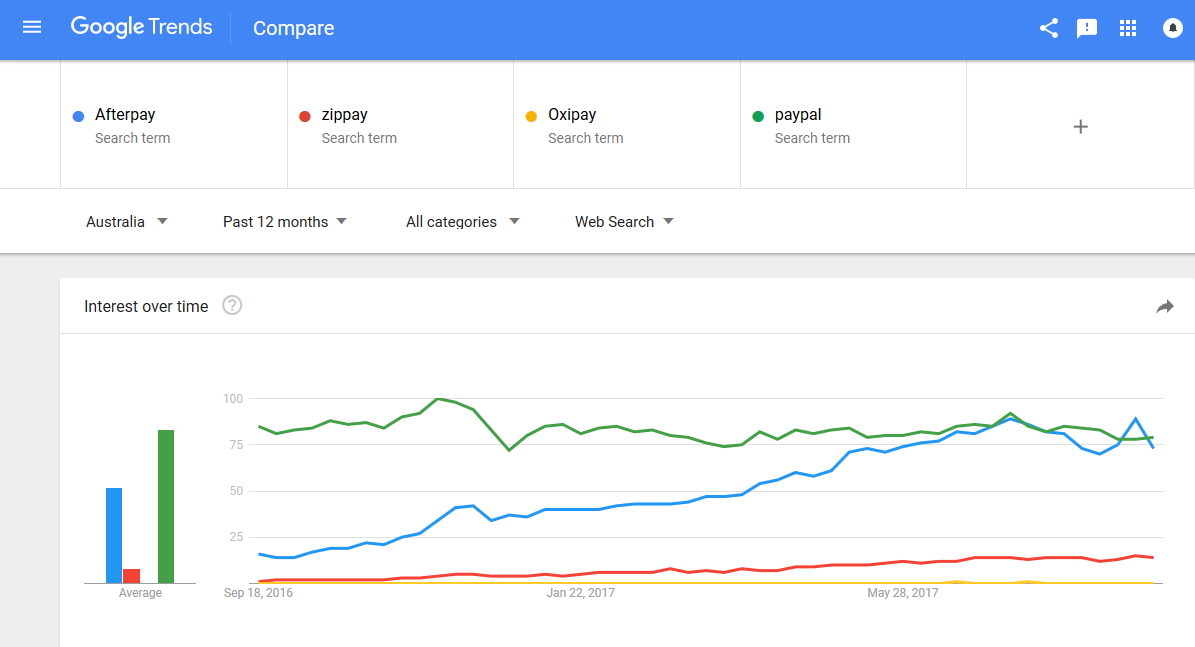 To give you a feel of the size of this market, Afterpay in the second quarter of 2016, had over 375,000 customers who spent $100m and to give you a feel of the growth of this market, that was more than double the $42m people spent with Afterpay in the previous quarter. Growth is expected, for example, overseas in Sweden such cards have about 60% of the market.

With our Point of Sale Software, you have the technology to get Afterpay.

The system works like this. A customer buys and gets an item immediately from a retailer paying with Afterpay. The retailer gets paid straight away minus a fee of about 4%. Then the customer pays Afterpay over an eight-week period with no interest. Zippay is slightly different in that a person has 30 days to pay with no interest, and if they wish, they can take longer to pay but with an interest rate which is a fraction that VISA charges.

Afterpay also runs promos for their merchants which have been very successful, The Afterpay Day on the 30 August, broke retail trade records with $15 million of sales with more than 70,000 orders were processed. See here for more details. {Link was removed}

If you want to know more let me know.

EOFY sale, last chance to save

Customers Fraud in your Loyalty Program

EOFY Countdown is on: Your Questions Answered

What Are The Benefits Of Birthday Rewards For Your Business?