Cost of running a modern point of sale computer system.

In business the running costs will vary, depending on many factors, in computers I tend to notice the better computer literate and more mechanical minded the owner is on average the bigger the problems they get. For example, they are the ones that experiment with the lastest speed boosters etc

What many people do not seem to realise is the initial cost is not that important as I show here. It is the running costs that need to be considered even more.

Here are some assumptions that I am using to calculate the running costs for computer hardware assuming we start with a cost of $6,000.

I would look at a three (3) year period, anything over that I would consider a bonus. Many SMB businesses will use, however, five (5) years. I am dubious of that as after three years to get the effective use of your system it needs an update. At the very least, a new main computer (server) needs to be replaced otherwise the system is running to slow. This is particularly true if you are paying for time with staff.

The cost of capital, if the system hardware on a lease, it would be about $200 month over a 3 years lease, over 5 years about $124/month.

As a rule, the best advice in a business environment is if it ain't broken do not play with it. This is particularly true the better you are in computers. We frequently get big support calls after the clever nephew who knows this computer stuff helped out. This is partly because unfortunately, the rule of not doing anything does not work as computers now do need monitoring and maintenance. Under the hood, the operating system, the antivirus system, in fact, every bit of software today is all automatically updated. Seriously when the last time, you actually manually updated some software?

The other point is it is a difficult one to estimate as general rule maintenance often tends to be big or zero. For example, a client split a cup of coke over the laptop. The laptop shorted out and it was a total loss. I have seen computers after a fire. 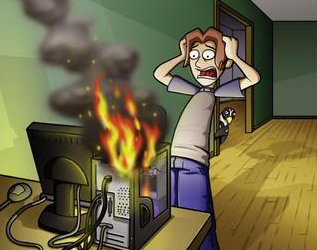 Still, computers are a mechanical device, that does get old. All will fail eventually. It's just a matter of time. In the first year, this is not an issue as we provide a complete hardware solution. Still, people that budget tends to use about 15% of the purchase price on repairs and maintenance on year one, which generally is covered by a warranty, so year 1 is worn by the seller with us, this may not be true always as many suppliers only offer three (3) months warranty. In any case, there is about a 20% increase a year after that.

Extras such as electricity.

On the three (3) years I expect some value left in the computer, I doubt there would be very little value on the five (5) year option.

This of course as noted earlier does not take into account the time you are paying employees. Often what we find is that the costs of operating and maintaining the legacy system exceed the cost of modernization.

I hope all of this helps.

This is your last chance to join the stocktaking meeting

You need to plan before the stocktake

You need to decide on the Instant tax write off now