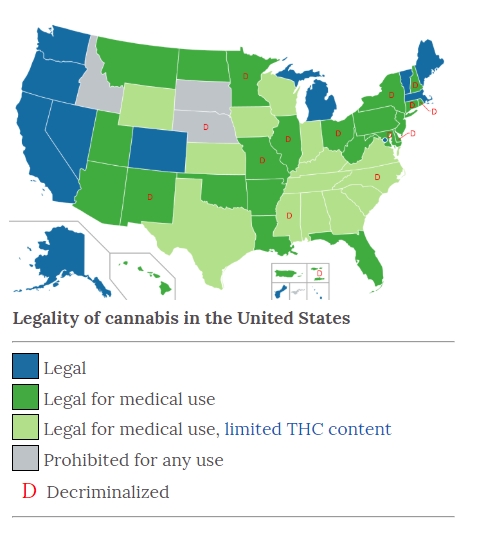 This is a map from the Wikipedia of the legality of cannabis by states now in the USA. On October 17, 2018, Canada became the first G7 nation to legalise recreational cannabis fully.  In both places the retail market is enormous. The legal US Cannabis industry grew by about 25% a year to $10.4 billion in the U.S. in 2018, and it now employs more than 250,000 people.

So many retail experts think that soon will come a cannabis boom to Australia. I know I just spoke to one of these experts. To give you a feel of how big they think it is going to be the Australian legal cigarettes sales are about 6 billion dollars, the Australian Cannabis Market he was expecting to become about $22 billion. That may be long term and include cannabinoid-based medicines which are predicted to make a significant impact on the pharmaceutical business.

Based on the US figures, for retail and using their tobacco industry sales as a base which are 125 billion U.S. dollars, so based on that in Australia, as a first level approximation, I would expect about 500 million dollars and such an industry would employ about 12,000 people. That, of course, would grow as time moves on. You can see why these experts are excited.

What I do know is that currently, medicinal cannabis farms are sprouting up around Australia, with demand for the product ramping up.

Is it coming for recreational use in Australia, I think so but when I have no idea. It certainly does, however, give food for thought.

Issue your own gift cards to increase sales

Why use splitting of bills in your shop?

What is the future of remote work? Google and Amazon

Professional systematic Retail Counter management: Use it in your shop.

Importance and benefit of using your fixed asset register

How to mark perishable items in your shop