Wi-Fi vs. Cable which is better

You have a computer in the back or in an awkward position in the shop that you want to connect to your POS system. You have two choices now Wi-Fi or cable.

As for Wifi today it is fantastic particularly if you have it meshed. Plus you do not need to pay for cable installation, which can be a bit if you need an electrician and/or a shopfitter to do it.

That being said, the cable can give Wi-FI a run for its money as it is faster and has fewer problems.

Speed in practice Wi-Fi can vary greatly, what you will notice in use that if suddenly slows down and then goes back up again. This is because it depends on many factors. Having too many Wi-Fi units can cause problems. Interference from environmental factors such as weather. Other electrical devices such as a shop next door that has its Wi-Fi network which often interferes with yours or a lunchroom with a microwave.

One of our clients complained that their Wi-Fi suddenly was now running slow. What we found was that the router had been moved behind some items which blocked the signal.

These Wi-Fi antennas are shown here in green 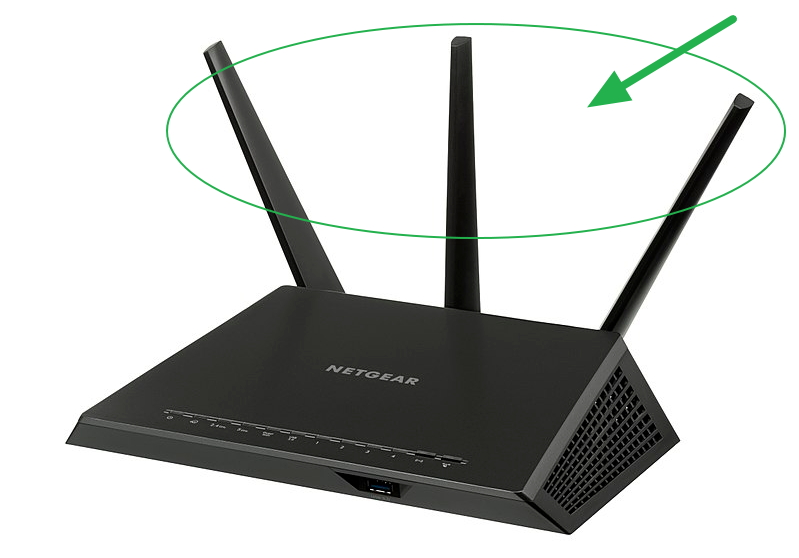 These should ideally be high up on the wall where everyone can see it, see them. That is why walls are often a problem. It is also why today, many routers and mesh units are advertised that they look nice because they are often in a spot that people will see them.

The cable is just faster than Wi-Fi, probably about ten (10) times. Your Point of Sale software often requires to pull in a lot of information mainly if you are doing a search or a report and, unlike with Wi-Fi, its speed is consistent. It is not going to suddenly slow down because some electrical machine is now generating large amounts of static.

If security is an issue to you, then it is much easier to break into a Wi-Fi network, then a cable network. Given access, in less than a minute, a hacker can often break into your computer Wi-Fi network even if its password protected. We have had a few cases of this with employees using the owner's internet to download torrents. A cable network requires some serious equipment and work. You would need to cut the cable, put a plug on that cable, then install a switch on that cable and then run a cable from that switch to their computer. In all my years in retail, I have never seen anyone do it.

So overall unless you have a temporary need for some computer or printer that is pretty far or inconvenient place from the rest of your POS network, I suggest that you run a cable.