The retail apocalypse in the US is the closing of a large number of brick-and-mortar retail stores and shopping malls from 2010. Here are some haunting photos of abandoned shopping malls across America

The question being raised in Australia now is going to happen here too? It is difficult to say, but so far almost everyone agrees that it has not happened yet.

I went to the Australian Bureau of Statistics and went to their page here on retail.

Then using excel made a graph of yearly sales for every sector since 1982 to 2018. 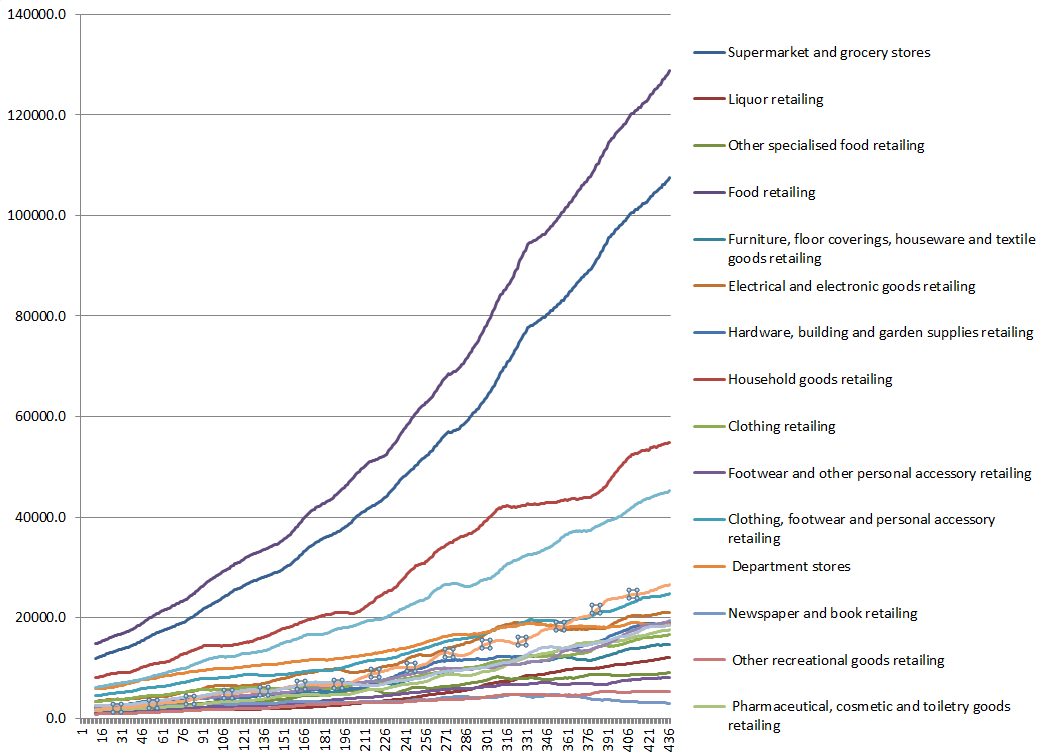 As you can see overall, it does look good. Overall retail sales and retail property overall in Australia have been healthy. Yes, there have been terrific changes in the retail landscape, for example, video rentals, books and newspaper sales are all down, but others such as food and footwear are up. This up and down by different sectors in retail has been going on since retail began.

Now some of the sectors in our marketplace look good.

However when you look at the one that seems to be now creating the most concern in our market space - newsagencies.

It does not look so good, and I have been to many discussions and meeting about this sector's performance that is concerning many of its suppliers, as you can see its high water mark was about 2010.

However, there are several points to keep in mind. The first point is that many shops move across sectors. A shop that is doing poorly in newspapers can switch to other fields e.g. I have had clients that have turned their shop into a cafe, gone into art supplies, become gift shops and toy stores. Soon it is no longer a newsagency but something else.

The problem is that most suppliers cannot move so quickly. A newsagent once he moves partly to becoming a cafe, soon loses interest in magazines (profit margin 25%) because they have more valuable stuff to sell like cake and coffee (profit margin 55%). The magazine company soon gets very upset.

Which is moving to an interesting point that often what we see in a sector as the sector drops the players inside that sector do better!

What is the best printer for my home office?

Why not study your stock shrinkage now?

Try having in your shop several special areas